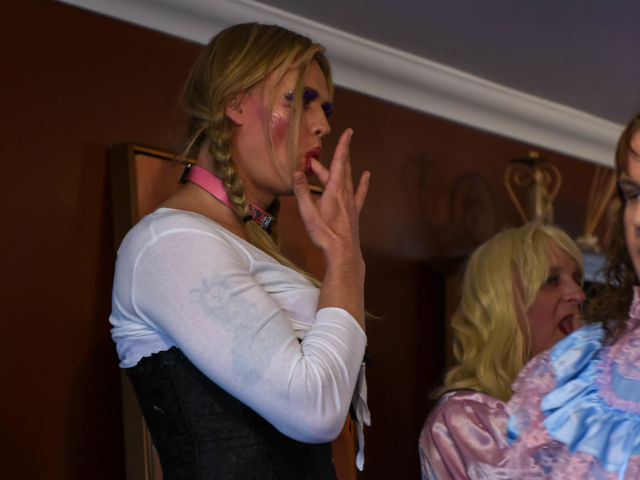 Every one of the Sissy Manor Mistresses was truly divine.

When I first arrived at Sissy Manor, I was escorted into the Kitchen by some of the most beautiful Ladies that I had ever seen in my whole life.

With such beauty and exquisite elegance wherever I looked, my chastity cage became very tight, very quickly; the pain serving as an abrupt reminder of my place beneath these superior Ladies.

I was lost in the mesmerising beauty of the two Mistresses that came over to me first, Mistress Scarlett Thorne, and Mistress Inka; as they stripped me of my horrible boy clothes and sat me down on a chair ready to have my makeup done.

The room was a hive of activity, with a team of two Mistresses, doing each of the arriving sissy’s makeup before whisking them off to the conservatory to pick out a lovely dress. It was so much fun listening to Mistress Inka and Mistress Scarlett Thorne discussing ideas for makeup styles as they put on my war paint, they make such an epic combination together; both being very naughty and lovely caring people.

I felt so honoured, safe, and happy to be in the immediate presence of two of the world’s most capable, and world renowned, Dommes; that I secretly didn’t want them to ever finish the makeup, but there were far more enjoyable things ahead; this was just the start.

Once the war paint was done, the enchanting Mistress Scarlett Thorne whisked me off into the conservatory to pick an outfit. I looked at the various outfits and dresses available; and was totally bewildered by the choice.

Mistress helped guide me to pick a dress that suited my size, shape, skin tone, and makeup style; before helping me accessorize. We then went to look in the mirror and I was absolutely amazed at the transformation. I felt so happy I could cry; I had been a little bit worried about going to Sissy Manor to start with, for a couple of silly reasons, but mostly because it was my first time.

All the Mistresses, and the beautiful Sissy Charlotte, had put me at ease as soon as I arrived, and now here I was; amazed at the transformation and ecstatically elated by the whole wonderful experience.

Once all the sissies were suitably dressed, we were all led into the lounge and lined up before being split into two groups. One group was to be trained in deportment, while the other; which I was part of; was led into the study for a very sexy spanking and caning. I love having my pretty sissy panties pulled down, and being spanked by beautiful women; so, this felt like heaven. We were expertly spanked, flogged, and caned by the stunningly gorgeous Mistresses, Lady Sara Borgia, Mistress Liladae, and Mistress Brook. Unfortunately, time passed very quickly, and although I didn’t want it ever to end, we were called through to change over with the other group.

In the other room, we began our deportment training which was being led by the mesmerizing Enchantress, Mistress Scarlett Thorne. This started off with us learning to walk and move properly, having to demonstrate, one after another, that we had understood the instruction, and could successfully carry it out. If we got it wrong, we were quickly subjected to a punishment spanking from all of the Mistresses. As the training moved on, this turned into competition for the Ladies amusement, pitting the sissies against each other, but having the added difficulty that two gorgeous and mischievous Mistresses, Mistress Luci, and Princess Jessika; were teasing us all and trying to make us fail the task so they could see us punished.
Trying to concentrate on the task and hand, and not look at such extraordinarily erotic Ladies was, as you can imagine; incredibly difficult. My chastity cage was straining and not very ladylike, so I kept having to adjust myself in order to hide my excitement. I didn’t want to be punished, but every one of the Sissy Manor Mistresses is unbelievably beautiful, and extremely sexy. Once our deportment training was complete, we were filed into the kitchen and taught the etiquette for being good serving maids. We served the ladies some afternoon tea and celebrated the lovely Princess Jessika’s Birthday.

After this we went back into the lounge and things started to get very naughty indeed. Very soon I was on my knees in front of the amazing Mistress Luci, and Princess Jessika; as they took turns deep throat face fucking me while holding onto my pigtails. It was immense. Princess Jessika kept putting my hands on her legs while she fucked my face with her massive strapon, it felt so naughty. My little clit was straining in chastity; it was so fucking hot. When Princess was done fucking my face, she passed me over to the enthralling Mistress Luci who had her strapon ready, and wanted to fuck me like the sissy slut I am. She threw me over the sofa and began to open up my sissy hole with her fingers, breaking me in gently. I felt the strapon gently pushing before she entered me and stretched me wide; fucking me over the sofa like a ragdoll before leaving me exhausted and used lying on the sofa. It was sissy bliss; sheer Nirvana.
As the evening progressed, I was fucked at both ends by more and more Mistresses, being used until I couldn’t take any more. I felt exhausted, but Mistress Scarlett Thorne and my new sissy sister Daisy, helped get me into the dining room, and out of my tight corset for a small break. The one thing that was apparent about all of the Mistresses at Sissy Manor, was that they were not some of the man hating Mistresses that you sometimes see, that are in it solely for the money, and don’t enjoy what they do; these were all world-renowned lifestyle nurturing Mistresses. Every single one of them was a true Domina in the Latin sense of the word Dominus, meaning owner; they dominated, enchanted, and controlled us with such exquisite ease, but they all seemed to care so much for our wellbeing too. It was incredible. Also, every one of the sissies, and the photographer were really friendly and totally lovely, some of the nicest people I’ve ever met.

Can’t wait till the Next One!